Steve Madaio Makes His First Appearance at Backstreet This Season 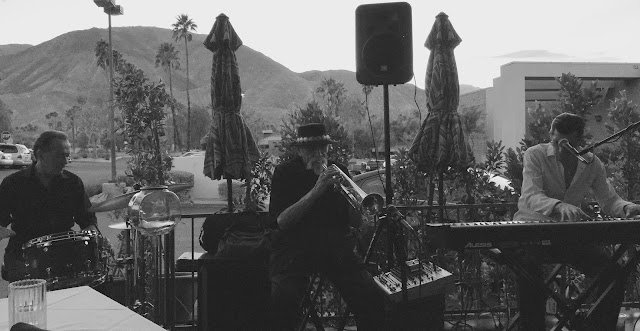 Jazz fans in the Valley were delighted that the brilliant Trumpet player Steve Madaio finally was able to perform again at Backstreet Bistro on Tuesday,  April 13.   Steve has had a rough winter, first recovering from a pretty serious illness and then losing his beloved father last week.  All his fans are so happy his health has returned to top-form and also want to wish Steve their condolences for the loss of his Dad.

Tonight Steve gathered two of the most important and professional players in the Desert, Pat Tuzzolino on Keyboard and Vocals and Jay Lewis on Drums.  Steve showed no sign that his recent health problems had any effect on his playing.  In fact,  his breath control and energy level were  higher than the last time I heard him play.  When it comes to music, Steve can do it all.  From tender ballads to straight-out Jazz, Steve makes the musical transitions effortless and is comfortable with both.

Pat Tuzzolino has always been one of my favorite Jazz performers because he is so original in his approach to music.  Pat's approach to music has always been related to what he feels inside about a song and its lyrics.  His vocals are superb!  His phrasing and timing are a pleasure to listen to, because of his own interpretation of the composer's lyrical message.  I never miss a chance to hear him.

I have written about Jay Lewis many times in my blog and with good reason.  Jay is one of the best Drummers playing today.  He never overwhelms the members of the group, he never falters in putting down a solid Drum line and contributes wonderful Drum solos when called upon.

I have attached a "Youtube" of Steve, Pat and Jay playing the Jazz standard, "Killer Joe" and know you will enjoy it.  I also couldn't help attach a second "Youtube" of Steve playing "Europa", a song that has almost become his Musical trademark.