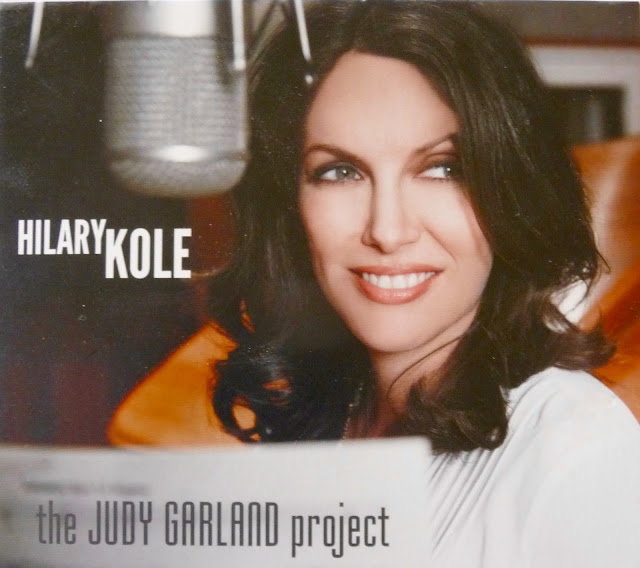 Hillary Kole had an interruption of her recording career for a few years but is now recording and  singing better than ever.  As a vocalist,  she has a strong, clear sensitive voice and when combined with her astute understanding of lyrics puts her in the top class of female vocalists performing today.  The songs Hillary recorded in this new CD are classic Judy Garland signature songs that we all will remember.  However, as is true for most of the treasured songs out of the "Great American Songs Book",  Hillary has managed to breath new life into each of the 15 tracks on this CD, and has made these songs new again.

This CD was produced by Richard Barone, engineered by Lou Holtzman and Mastered by Roger Lian Mastering.  I am mentioning this group along with Hillary Kole because together they did a perfectly magnificent job producing this CD.  These guys are good!

The supporting cast of musicians on this CD are also as good as it gets!  Pianist John Martino, Bassist Paul Gill, and Drummer Aaron Kimmel, Sax Joel Frahm.  The Strings are beautiful and if Sinatra was still around, he would be chasing them to record with him.  Violinists, Christiana Liberis and Juliette Jones; Viola, Stephanie Matthews and Cello, Reenat Pinchas.

The music world is now a better place with Hillary Kole recording again!  Take a look at these wonderful songs she has recorded!

Hillary headlines at the Iridium Club in NYC on April 26 which would be a great show to attend if you are in the area.

I have attached two "YouTube" videos for you to watch, and I know you will be blown away by both.  The first one is Hillary Kole singing "The Trolley Song" and the second one is the Arlen and Harburg gem "Over the Rainbow" written for the film "The Wizard of Oz".  I know we have all heard vocalists singing "Over The Rainbow" but for me, Hillary's performance of this song is so outstanding that I just had to share it with you.