Mike Costley Singing Better Than Ever at Vicky's in Indian Wells, Ca 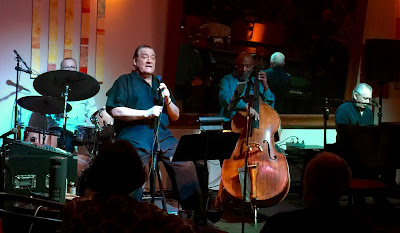 If you like songs from the "Great American Songbook" and great vocals, there is no better place  than Vicky's in Indian Wells on Monday and Tuesday nights.  Mike Costley's singing and major-star stage presence captures the audience from the first note he sings and does not release them until 2 hours later when he takes his first break.  Mike has a strong voice with an unbelievable range probably 3 octaves and always puts on a Jazz vocal seminar at every performance. Mike Costley is without a doubt one of the best singers performing today.  One only has to observe the large number of professional singers who show up whenever they have a free night to heard Mike sing.  Tonight was no exception as some of the most talented Singers and Musicians in Southern California came to see Mike.  This group included the multitalented Singer/Composer Michael Dees, and Valley favorite Linda Peterson who brought another talented member of her family Producer/Singer/ Composer, Rickie Peterson.  Also in attendance was the outstanding Piano player, Richard Turner who performs with the John Stanley King group on Sunday nights at Vicky's, Pianist Judy Wolman, Tenor player Joe Canoura and several other talented Singers, Carole Hampton, Lee Hartley, Kristie King, Michael DelAngelo, Larry Capelito and Jeannie Norris.

For Mike's Monday show he is supported by three highly talented and musically-skilled musicians,  Dennis Michael on Piano and Vocals, Wayne Boyer on Drums and Flugelhorn and Henry Franklin on Bass.  When Mike surrounds himself with musicians of this quality, his performance is raised to a greater height to the delight of the audience!  Dennis Michael is the heart of the supporting group providing wonderful arrangements for Mike and thoughtful creative solos.  Dennis has been the accompanist for numerous big-time Vocalists over the years and after listening to his piano work tonight it's easy to see why.  His touch is soft and thoughtful providing solid support for Mike without taking any of his creative space away.  Michael is also a wonderful Jazz singer in his own right.  He sang a couple of Jazz songs Monday to the delight of the audience.  Wayne Boyer is a simply amazing musician playing Drums and Flugelhorn at the same time with excellence! Wayne also plays Piano and Organ.  Completing this great supporting trio is Bassist, Henry Franklin.  I have now seen Henry three times this season and he has quickly become one of my favorite Bassists.

The music starts at 7:00pm but if you want a seat, plan to get to Vicky's early.  Don't miss the chance to hear Mike Costley perform, it doesn't get any better than this!