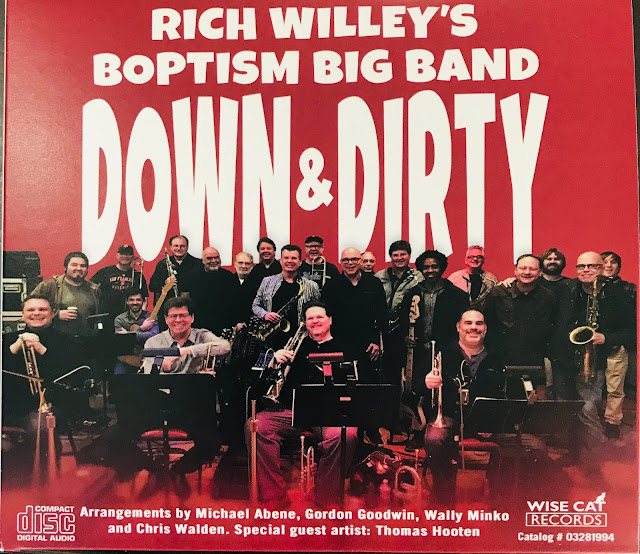 I have a treat for all my Big Band fans.  I have just listened to Rich Willey's "Boptism Big Band's" new release "Down & Dirty" and it's fabulous!  Trumpeter, Bass Trumpeter, Bandleader and Composer Rich Willey has a remarkable resume consisting of performing with many great musicians including Maynard Ferguson, Lionel Hampton, Buddy Morrow and vocalists Mel Torme, Jack Jones, and Shirley Jones.  The 11 tunes written by Rich Willey are as good as band music gets and will surely be played by lots of other bands in the future who are looking for fresh, new and inspiring music.  Rich Willey's composing is clear, versatile and understandable.  In addition, the talented musicians in this band are all world class and make for a listening feast.  And lastly, the arrangements are sparkling good.  These three elements make "Down & Dirty" one of the best big-band CDs released this year in my opinion.

Rich's tunes are perfectly written and arranged for the 18-piece band that Producer Dan Fornero assembled to record this CD.  An impressive group of Arrangers were brought in by Rich to create arrangements to bring Willey's compositions to life.  The group included Michael Abene, Gordon Goodwin, Wally Minko and Chris Walden and they truly are magnificent arrangements.   Award-winning engineer Tommy Vicari did the remarkable recording of this 18-piece band to complete this great CD.

This CD contains 77-minutes of musical delights including Jazz, Funk, Latin, Baroque, Reggae and Rock.  I highly recommend it to anyone who loves exciting new Big Band sounds!

I can't wait for you to hear the two YouTubes I have attached.  The first is "Boogie Beast" and the second is "Walter The Ferret" both written by Rich Willey.