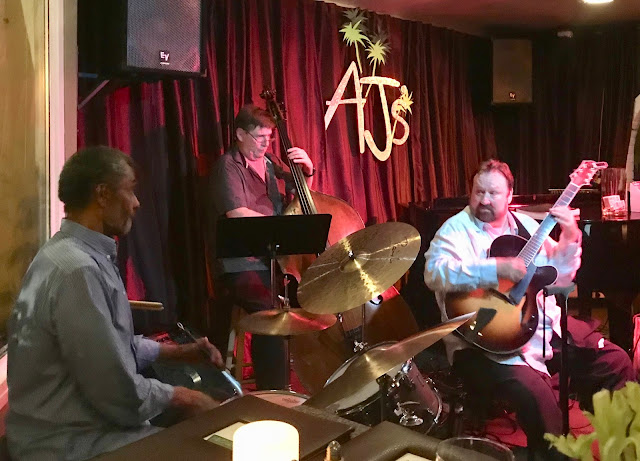 My first visit to AJ's this year was great fun.  Doug MacDonald led a super Jazz Trio consisting of Doug on Guitar, Larry Holloway on Bass and Tim Pleasant on Drums.  Doug plays with lot of groups but this is the first time I saw him in action as the leader of the group.  Turns out he is a natural, controlling all aspects of the performance while still allowing his supporting players to shine also!

Doug started at 7:00 PM and the first hour was just straight-ahead Jazz and it was great!  During the second hour or more, Doug called up any musicians in the audience who wanted to sit in for a couple of tunes.  There must have been over 15 musicians in the audience who came up to play or sing and it was great fun.  Classically trained pianist, Rich Bono was first to come up and play piano for some terrific vocalists.  Rich is without a doubt the most sought-after pianist in the Desert by Vocalists.  He knows how to provide just the right support for all types of music and voices and singers never miss a chance to sing with him.  The parade of musicians continued well into the evening and Doug refused to stop until every musician who wanted to perform; had a chance.  If you want to hear some of the best vocalists in the Valley, AJ's is the place to be on Wednesday evenings.  AJ's has been totally renovated and the food continues to be excellent.

My thanks to Doug MacDonald, Larry Holloway and Tim Pleasant for some of the best Jazz sounds I have heard.  I also want to thank all the performers for providing a great night of music.

I could not find a video of Doug's Group on "YouTube" but I did find a video of Doug playing "Picnic" with a trio consisting of Doug on Guitar,  Yoshi Waki on Bass and Pete Zimmer on Drums.  Doug is one of the finest Guitar players performing today!