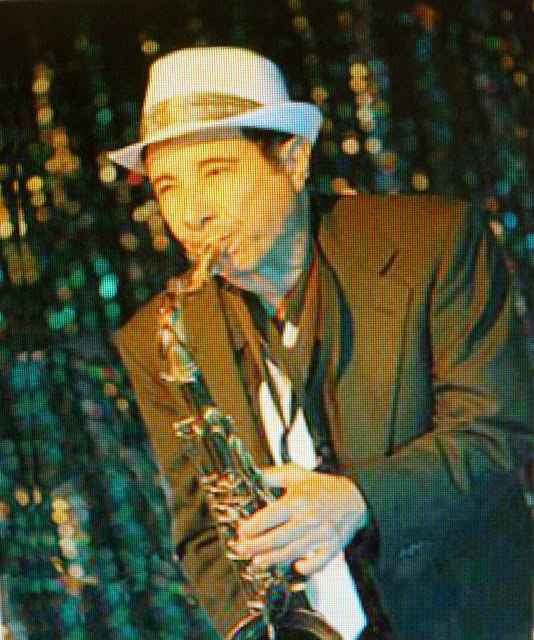 Anyone who has visited the Southern California live Jazz scene has probably run into Composer, Arranger and Reed player, Mikole Kaar.  Mikole Kaar has dedicated his entire life to live performing and even now when he has gigs 5 to 6 times a week, the first time he has a free night, you will find him sitting-in with other Jazz groups.  Playing since he was 9 years old, Mikole has studied Clarinet at Cal State and then became a Flute major at University of San Diego.

Mikole has just published a new CD, "Give Em Heaven" and it has been getting excellent reviews.  There is a mix of 10 songs on the CD, some great Jazz standards and a few written by Mikole for this CD.  The Jazz is hot and cool and so is the sound as Mikole has gathered 3 seasoned musicians to support him on this CD.  His supporting cast is made up of the fabulous guitar player and Desert favorite, Doug MacDonald who never disappoints his large Jazz fan base with his great playing, Paul Kreibich is on Drums and Harvey Newmark is on Bass.  Together they make beautiful music!

This CD has a wonderful groove and I especially like the pairing of up-tempo tunes with a couple of outstanding ballads.  I love the interpretation of the old Jazz standard "Invitation" that still sounds haunting every time I hear it.  One cut that Mikole composed, "A Song For Claire" has been selected to be on this year's "Desert Jam CD".  Profits from this CD go to "Wellness in the Desert Charity".  I also loved cut 4, "Darlicious".  I have to say that the influence of Doug MacDonald's wonderful guitar work on Mikole's playing is clear.  These two seasoned pros have been playing live performances together for a while now and they work perfectly together.  You can buy the CD or any of the tunes on Spotify, YouTube and Google and you can go on site to hear some of the great stuff Mikole has put down.  Mikole plays all over town and currently does gigs at "Oscars" in Palm Springs among other live music spots in the Valley.

I found a "YouTube" of Mikole Kaar playing the flute for the song "Comin' Home" with the Jackson Garrett Band to give you a sample of Mikole's playing style.  Enjoy!