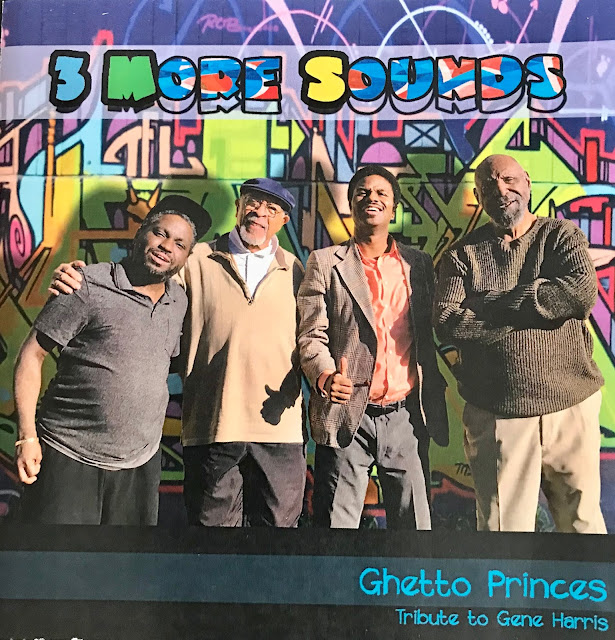 Henry "The Skipper" Franklin and Robert Turner and their group " 3 More Sounds" have produced and recorded a terrific new CD that is a tribute to Gene Harris.  The idea for the CD was born when Robert's and Henry's paths crossed in 2014 in Hangzhou, China.  Henry was just finishing  a tour gig in this Chinese city and  Robert was just coming in to replace Henry Franklin's Band.   Henry Franklin had worked with Gene Harris on numerous occasions and Robert Turner always treasured Gene Harris as one of his playing heros.  As soon as Robert found out that Henry had a long playing history with Gene Harris, he couldn't ask questions about Gene quick enough. After many hours of discussion,  these two major players decided that they would someday cut a CD as a tribute to Gene Harris and "Ghetto Princes" is the result.  As you listen to the cuts on this new CD,  you will hear Robert at times playing very much in the Gene Harris fashion.

Robert Turner is one of the brightest musical stars playing today and his ability to arrange and swing music is recognized throughout the Jazz world.  He is not just a casual player, Robert is a fine technician and has a clear understanding of music composition and how it develops.  I have heard him playing live with several artists and he can handle any kind of music for vocalists or instrumentalist with easy, style, and creativity.

Henry "The Skipper" Franklin is a living legion and continues to impress Jazz lovers wherever he performs.  I have heard him with small trios and also with big Jazz groups and he can do it all.  His high level of Bass playing is internationally known and sought out.  He has a long list of Jazz giants that he has worked with like Roy Ayers, Gene Harris, Freddie Hubbard and Joe Williams just to name a few.

Joining these two remarkable Jazz performers is Khoran Harrison on Drums.  Khoran and Robert have been playing friends since they were teenagers and know each others' playing style inside out.  Veteran Drummer Carl Burnett was added as a special guest and he plays Drums on Cuts 2, 4 and 9.

I have attached two "YouTube" videos for your listening pleasure.  The song is Cole Porter's "Love For Sale" that features a terrific Bass solo from Henry Franklin.  The second song is an up-tempo version of "Besame Mucho" composed by Consuelo Velazquez.