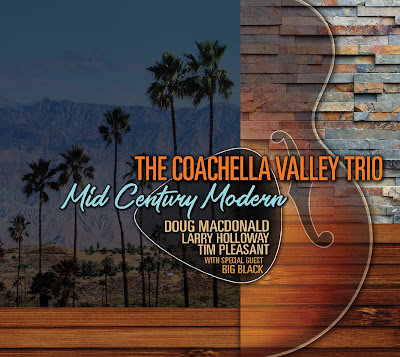 Guitarist Doug MacDonald has just released a new CD, "Mid Century Modern" with his trio, "The Coachella Valley Trio". "Mid Century Modern" is a phrase visitors to the Palm Springs California area frequently hear.  It brings to mind American Modernism and its distinctive architecture that had its roots in not only Palm Springs but in the entire Coachella Valley area.   The life style in this area of California has its own vibe and it's cool and chilled.  Live Jazz music is alive and well in the Coachella Valley and Guitarist, Composer and Arranger, Doug MacDonald is in the forefront of the musical action.  Doug is one of the finest guitar technicians performing today and is highly sought out by Jazz venues from coast to coast.  When Doug is not traveling for out of state gigs, he is performing at many different Jazz sites including AJ's on the Green in Cathedral City every Wednesday.  In addition, Doug hosts a local Jazz radio show on a small but excellent non-profit 24-hour Jazz station in Palm Desert, CA,  KAJI Radio.   Doug's Trio, "The Coachella Valley Trio"  has been performing in the Coachella Valley Jazz clubs for several years and has developed a large following of fans.  The trio consists of Doug MacDonald on Guitar, Larry Holloway on Bass and Tim Pleasant on Drums.  Doug invited special guest, Big Black who plays the Djembe to join the group on several cuts.

Larry Holloway is one of the most respected Bass players in the West and in addition to all his playing gigs he finds time to manage the renowned "Coachella Valley Symphony".  Tim Pleasant, the Drummer for the group and Doug have known each other for years preforming together in the Valley and also in the New York area.  As a result of the talent level of these three musicians and the length of time they have played together, the sounds from the trio at times seem to be merged into one voice.  I had the pleasure of hearing Big Black play with this group recently at AJ's and he adds a special element of excitement to this wonderful trio.

There are 11 wonderful songs on this CD,  8 beautiful standards and 3 original songs written by Doug,  So you get to hear some great standards and also experience Doug's excellent composing at the same time.

I have attached two "YouTube" videos for you to listen to.  The first is a tune written by Doug, "Cat City Samba".  The second "YouTube" is the Johnny Mercer, Harold Arlen gem, "My Shinning Hour".
"Cat City Samba"