Mike Costley, Simply One Hell of a Singer! 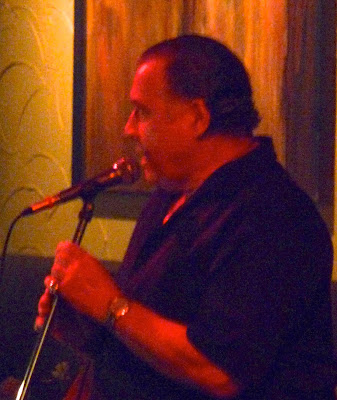 I recently visited Three Sixty North in Palm Springs where Mike Costley performs every Thursday night. I heard Mike sing last season, and I was anxious to see if he was still singing as good as he was last year. What happened is exactly what happens every season I hear Mike sing. I am always reminded how good a singer he is! In addition, Mike is so much more than a great singer.  He is an astute professional performer who never takes his trade for granted. When it comes to performing Mike Costley is a perfectionist and expects no less from anyone he selects to support his singing.  The result is, no matter when you go to see and listen to Mike Costley, you will hear superb singing supported by musical excellence.  Tonight's performance was a perfect example because Mike's usual drummer, Sal Frisaura, was unavailable and Mike asked my old friend, the always dependable Al Lopez, to sit in with him and his Guitar player, John Pagels. Al played Tenor Sax and flute and handled the Costley arrangements beautifully.

I have heard a lot of great singers in the Desert but I have not heard any singer better than Mike Costley. There are several factors that put Mike Costley far above other singers.  First, Mike has one of the strongest voices I have heard. His range is nothing short of remarkable.  In addition, while a lot of singers simply try to copy the style of the great singers that came before them, Mike approaches every song he sings with his own style and interpretation. Mike sings the "Great American Standards" as good as any of the great singers of our time but his talent doesn't stop at singing great ballads.  Mike also excels singing almost every Genre of music including The Blues, Country, Contemporary and good old Rock and Roll!

We are thankful for all the live music that we have in the Coachella Valley, but having Mike Costley performing live every Thursday night in Palm Springs is the topping on the cake.  I can honestly say that I would gladly pay to see Mike Costley sing. Here in the Desert, we all get the chance to hear Mike sing with no cover, music or admission charge at Three Sixty North.  In addition, the food at Three Sixty is excellent and reasonably priced. It's the best deal in town.  I hope this review convinces
you to get over to Three Sixty North on Thursday, you won't be disappointed.