Deanna Bogart Brings Down the Roof at Vicky's in Indian Wells, CA 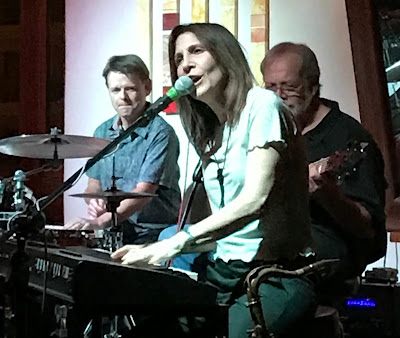 Composer/Vocalist/Arranger/Keyboard and Tenor Sax player, Deanna Bogart is bringing down the house aided by her talented band at Vicky's of Santa Fe every Monday starting at 6:30.  For those who have not seen Deanna perform,  she is a spinning domino of musical talents and energy.  She loves to perform and nobody does it better!  Deanna's musical tastes span many musical schools including Blues, R & B and Pop, but her love is for Boogie Piano.  I would guess that for most of you, it has been been a long-time since you heard Boogie Piano being played live. Also, my guess is you have never heard it played like Deanna plays it.  Her fingers move at an unbelievable rate of speed up and down the Keyboard, never missing a note or a beat!  It's fun to see the members of her band, all veteran Jazz players,  just watch with the rest of us marveling at her dexterity.  Her bandmates are the-always-wonderful Jeff Olson on Drums,  Composer/Guitarist wonder Chuck Alvarez on Guitar and the talented Bob Gross on Electric Bass.  Deanna is a test for these three veteran musicians as they never really know where Deanna may be going during a song because she is a free spirit and takes the music wherever she feels it's telling her to go.

Music has been Deanna's life from a very early age, and she never had a doubt of what she wanted to do the rest of her life.  It's very seldom that you have the chance to experience a musical talent with such energy like Deanna live and close up.  Now you get that chance every Monday night at Vicky's with no coverage.  Just one word of advice, get there early because when she performs there are no empty seats in the house!   She is a delight to see and hear.

I have attached a real treat for you.  This is a "Youtube" of Deanna performing live, one of her original compositions, "Still the Girl in the Band".   Fasten your seat belts and listen to this!