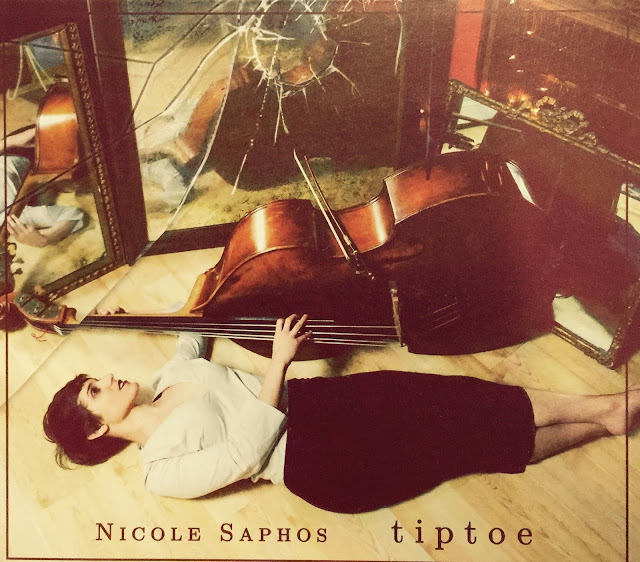 Bassist, Vocalist and Songwriter Nicole Saphos takes the "Great American Songbook" for an exciting ride. On her new CD, "Tiptoe" Nicole has fun with some great classic songs like Cole Porter's "Just One Of Those Things" proving that when a great Vocalist meets a great song, the great song becomes new again.  But singing is just one of Nicole's talents. She is a terrific and inventive Bass player leaving the standard Bass line behind in search of new creative Bass Jazz compositions.  In addition to the standards in this CD, Nicole has also included 4 original songs she composed.  Personally, I like to hear a new singer perform a standard first before I listen to a newly composed song.  The way a singer approaches a standard can tell you a lot about their imagination and style.  Nicole passed this test with flying colors with the first song on her CD, " Cole Porter's "Just One Of Those Things".  I found a video on "YouTube" so you can judge for yourself.

In 2012, Nicole formed her own trio with Ele Rubinstein on Drums and  John Lee on Guitar.  Playing together over the past 4 1/2  years has created a tight fit for this group with each performer anticipating each others every move.  This CD is very refreshing combining great standards with some new musical approaches to new music composed by Nicole Saphos.

I have attached a second "YouTube" of the trio playing one of Nicole's original compositions, "Broken Ballerina".  "This song uses  a ballerina's dedication to art as a powerful metaphor.  Ballerina's careers are tragically cut short by injury and age, yet knowing this fate, they still commit their lives to this fleeting time."