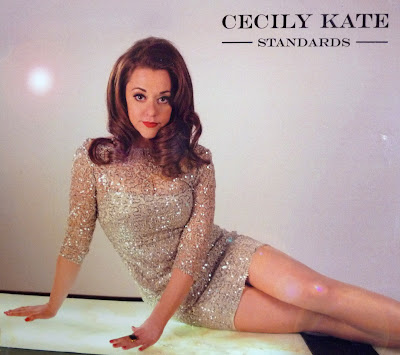 After listening to "Standards", the first CD from multi-talented Cecily Kate, I still wondered how this could be her first CD.  Why did it take her so long to creat her first CD? Cecily has spent years performing in the trenches and paying her dues. After attending college at Indiana University, she worked with the New York Grand Opera conducted by Vincent La Selva and sang the role of Annina in "La Traviata" in Central Park.  She has also performed as a soloist in a Mozart Festival. She received a rave review in her off Broadway debut as "Belle" in a "G & S Christmas Carol". Cecily's Broadway debut in "A Wonderful Life" starring Brian Stokes Mitchell and Judy Kuhn was a huge success. The show was named one of the top ten best theatre shows of 2005 by Time Magazine. She also currently teaches ballet, tap, musical theatre and voice in New York City and New Jersey, her home state. Cecily's background explains exactly why it has taken so long to produce her first CD. Cecily has dedicated her life to music and never looked for short cuts!

Cecily is a pleasure for all of us who love standards from the "Great American Songbook".  It's great  that we have such a gifted young singer who understands the value that these songs still hold for the current generation. According to Cecily "I began putting this album together in my head over a year ago, while performing cabaret shows for an older generation. Half of the audience would sing along, others would get up and dance, and the rest would simply sit back and smile.  The history behind these classics makes them timeless, and I noticed that they had the ability to transport the audience to wonderful places in their memory."

Thank you Cecily for your voice, your inspiration, your vigor and insights into the world of great American standards!

Cecily has worked hard to place her own unique stamp on each of the standards listed below, molding the songs through years of performing. The results are outstanding giving these "evergreens" new life and making them truly her own. To quote Peter Allen, "Everything Old Is New Again".

The supporting musicians Cecily asked to join her on this CD are all highly talented sidemen.  Brand Ross on Piano, Chris Bonner on Double Bass and Brian Pareschi on Trumpet. Finally, all the songs were produced by Cecily Kate adding to her list of brilliant talents.

Here is a list of the Songs on the "Standards" CD: