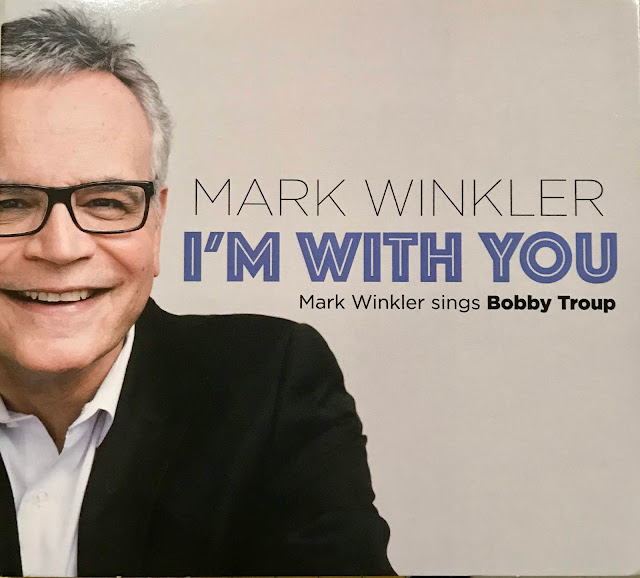 Singer, Songwriter and Arranger Mark Winkler has recently released a terrific new CD, "I'm With You".  The CD is a tribute to "Mr. Hip" Bobby Troup.  For those of you that don't know much about Bobby Troop, you are in for a treat!  I have no doubt that the term "West Coast Cool" was coined with him in mind. Bobby Troup is best known for his great standard, "Route 66" that is still recorded and performed today as much as when it was first written.  It is a classic song both in Music and Lyric that is still a favorite of Jazz players.  Bobby Troup had a lot more to contribute to contemporary Music than just "Route 66".  Mark Winkler has developed an enduring affinity with Bobby Troup and counts him as one of his Musical heros.  Mark says, "It's easy as pie for me to sing Bobby Troup songs.  Once I choose the tunes I want to create new arrangements for, I approach the songs very easily.  I feel like I understand him.  We've got things in common.  He swings and I love to swing.  He's funny, clever and whimsical,  yet could also write and sing the Blues.  As a songwriter, I am always aspiring to achieve that same range of emotions."  Once you hear the wonderful collection of songs in "I'm With You" I am sure you will fully agree with Mark's comments.

Mark Winkler is a mega-talented Musician who never stops learning from other mega-talented Musicians both young and old.  It feels like I see his musical fingerprints on at least one new CD that I receive every month.  He must never sleep because his musical contributions are non-stop and always at the highest professional level.  His musical tastes in what he decided to do is always guided by the highest Musical standards.  I also know that Mark loves to give back to his industry by helping young talented Musicians break through by sharing his ability as a Producer and Arranger and Teacher.  I applaud Mark for his efforts to help up-and-coming young Musicians.

It is an honor to do a review of a Composer/Lyricist who has had over 250 of his songs recorded    and/or sung by Dianne Reeves, Liza Minnelli, Steve Tyrell, Jane Monheit, Dee Dee Bridgewater, Lea DeLaria, Kenny Rankin and Sara Gazarek.  Mark was included in the 2018 "Rising Star Male Jazz Vocalist list in "Downbeat Magazine".   Mark's work as a Lyricist has resulted in six musicals that are playing around the country, including "Naked Boys Singing" which is, at 19 years, the second longest running show in Off Broadway history.  Mark has taught a Lyric writing course, "Crafting Great Lyrics: A Songwriters Workshop" at  "UCLA Extension" for 13 years and at the Los Angeles School of Songwriting.

However,  in Mark's latest CD it is singing skills that come front and center.  Mark has a beautiful silky smooth voice and Sinatra-like phrasing that makes him such an impressive vocalist.  The songs he has chosen are not easy for any singer to perform but Mark makes singing these special songs look easy.  I have attached two Bobby Troup songs from Mark's CD that I think you will enjoy.  My guess is that both of these songs will be new to you.  The first tune is "Please Belong To Me" that was arranged by one of my personal favorite Jazz Piano players, Tamir Hendelman.  The Musicians joining Mark on this track are:

The second tune "It Happened Once Before" is a Vocal-Piano duet with another of my absolute favorite Jazz pianists, Jon Mayer.  Mark's Vocal is dreamy and no one knows how to play a standard better than Jon Mayer! 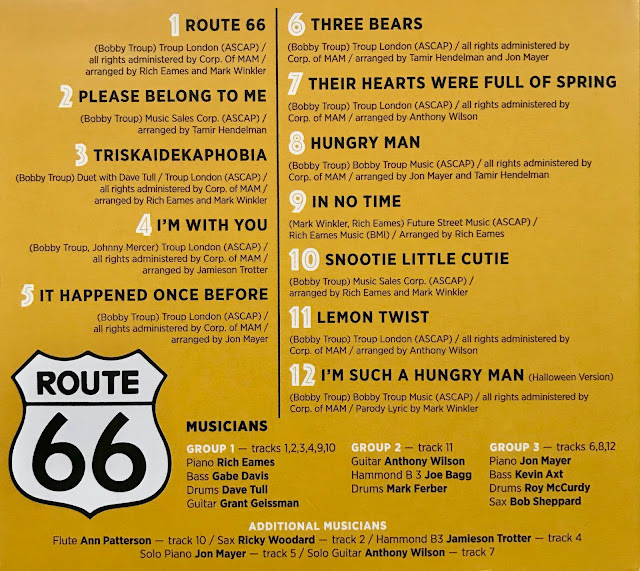