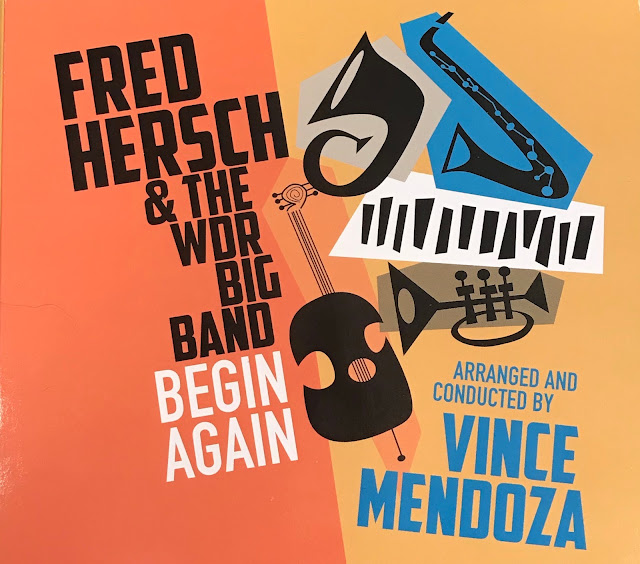 Fred Hersch continues to amaze me with the depth of his musical talents.   His solo recordings are masterful performances and his Piano trio work is possibly the best heard today.  But his talents don't stop there.  In Fred's lastest CD "Begin Again" he joins the wonderful WDR Big Band playing his compositions Arranged and Conducted by six-time Grammy winner, Vince Mendoza.  "Begin Again" contains some supurb compositions by Hersch and some wonderful performances by the members of WDR Big Band recently described by "DownBeat" as "One of Europe's finest large Jazz ensembles".  I find it impossible to determine what brings more to this CD, the magnificent compositions Hersch has written or the impeccable orchestrations Mendoza put together.  It really doesn't matter because this CD has music that needs to be heard by any Jazz lover.   The feel of the songs seem almost classical in nature and yet, they seamlessly provide space for talented solo opportunities from a group of musicians that include Alto Saxophonists Johan Horlen and Karolina Strassmayer, Tenor Sax player Paul Heller, Trumpeters Ruud Breuls and Andy Haderer, Tombonists Ludwig Nuss and Andy Hunter and Drummer Hans Dekker.  All these players are outstanding European Jazz players who were new to me, but Jazz is not limited by boundaries or language.  It  allows great musicians playing great music to be enjoyed by all!

Fred Hersch is one of the most respected Jazz musicians currently performing and is already one of the most influential in Jazz history.  Joining him in this project to provide arrangements, Vince Mendoza provides clear proof as to why he has had 33 Grammy nominations and 6 Grammy wins.  One might think that putting two musical giants together might have some issues but Hersch and Mendoza blend their talents perfectly to produce great music!


I have attached two "YouTubes" from this wonderful new CD that I guarantee will delight you.  The first is "Havana" that speaks well for the composing and playing talents of  Fred Hersch and the Arranging and Conducting unique skills of Vince Mendoza.

The second "YouTube" is "Rain Waltz" and it's also a brilliant combination of composing and arranging.  You might want to grab an umbrella because you may feel the rain.