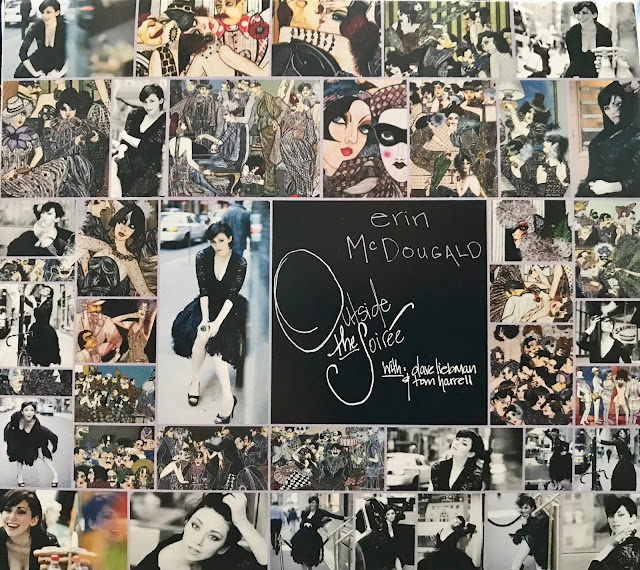 Superb Jazz Vocalist, Erin McDougal released her fourth studio recording, "Outside the Soiree" on March 16, 2018.  The information that was sent to me along with the CD stated "Erin McDougald's latest album exemplifies the concept of thinking - and singing - outside the box".  I couldn't agree more with  this statement!  Erin had her hand in most everything connected with this CD.  She contributed to all of the arrangements, except for #3 and #12,  selected a marvelous and, yet, an unusual group of songs for her playlist and picked a stellar band.  I am sure you will recognize most of the songs in her playlist but the essence of this CD is the fresh, new approach to each one that Erin has chosen.  It seems to me that Erin brings some of the vocal history of each song to the forefront and mixed it with great arrangements and impeccable Jazz singing that makes this CD super good listening.  I don't want to make light of the brilliance of taking an old song, keeping the original emotion of the original singers and then applying your own personal vocalized interpretations.  Few Jazz singers ever master this talent but there is no doubt that Erin has accomplish this feat!  Even though Erin's Vocals are new and fresh, every note and phrase she sings seem comfortable to the listener.  Her voice is pure and strong and she can go where few singers can travel with ease.

The band on this CD is as good as it ever gets for Vocalists.  They are all seasoned pros, and they all give Erin the space she needs while filling the supporting background perfectly.  The band features Guitarist and Pianist Rob Block, Bassist Cliff Schmitt, Drummer Rodney Green, Percussionists Mark Sherman and Chembo Corniel and Saxophonist Dan Block.  In addition, Erin brought in two old friends, Saxophonist David Liebman and Trumpeter Tom Harrell.  This is as good a group of Musicians that you will ever find!

I wanted to attach a "YouTube" of Erin singing one of the great songs from her album and it was a really tough job picking just one.  I settled on one of my classic favorites,  "Spring Can Really Hang You Up The Most".  Erin sings this ballet in an up-tempo fashion that works great!  Whether you are a professional Jazz singer or just a Jazz fan, Erin and her latest CD need to be on your "must-have" music list. 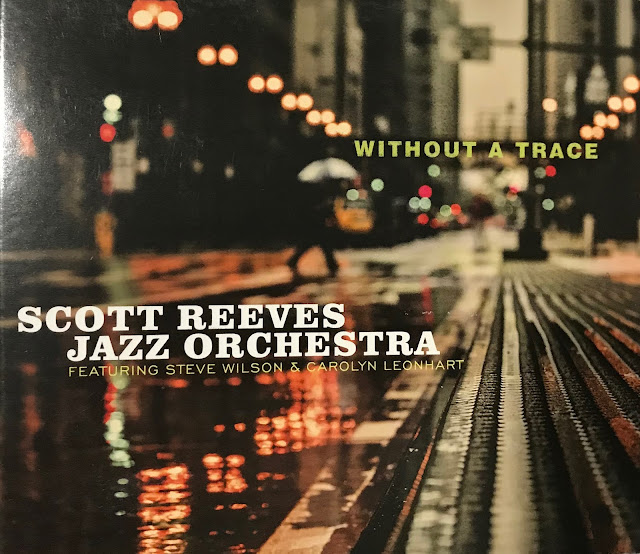 OK big band fans, I know I have featured a lot of Vocalists lately, so I have a present for you.    Composer, Trombonist, Arranger, Author and College Jazz Educator, Scott Reeves recently published his new CD, "Without a Trace".  The 17-piece Scott Reeves Jazz Orchestra performs both outstanding originals and re-imagined Jazz Classics in world-class form.  This CD which was released on March 16, 2018, "draws influences of the great Big Bands/ Composers andArrangers from Ellington and Gil Evans to Thad Jones, Bob Brookmeyer and Jim McNeely.  Nice company to be associated with!

This CD is so good, you will fall in love with it after just hearing it once.  The arrangements played by their 17-piece Orchestra are fresh and bright and the music flows effortless!

Scott Reeves is a musical giant in every aspect of modern-day music.  The fact that he was able to produce this CD alone was a major accomplishment in itself.  The costs of producing a big band CD is hard enough but getting 17 world-class musicians into the studio at the same time to record this CD is probably just as hard.  He deserves our support and thanks for keeping the big band sound alive and well for past and future generations.  Please help Scott by buying this wonderful CD.

I have attached a couple of "YouTubes" of "The Scott Reeves Jazz Orchestra" for your listening enjoyment.  The first one is the old Jazz chestnut "Speak Low" which is also the opening cut from the CD.  The second one features the lovely and talented Vocalist Carolyn Leonhart singing the original Scott Reeves composition and title tune "Without a Trace".

Email ThisBlogThis!Share to TwitterShare to FacebookShare to Pinterest
Labels: "Without a Trace" Carolyn Leonhart, The Scott Reeves Jazz Orchestra 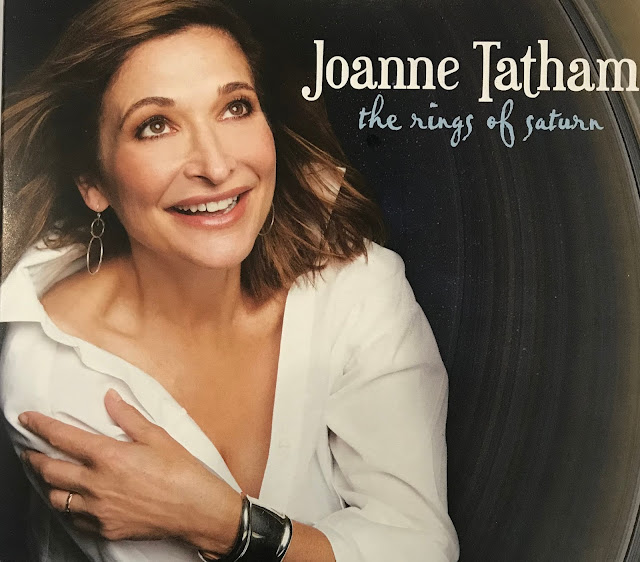 Vocalist Joanne Tatham has released her 4th CD, "The Rings of Saturn" on March 30, 2018 and it's a beautiful musical journey to some great old and new songs combined with some fresh arrangements.  Tatham successfully follows the proven traditions of the great vocalists of past generations: pick only first-class material, write fresh, hip arrangements and ask only the best musicians to join you.  The collection of songs in this CD are so different with unusual arrangements that singing the full playlist could be used as a master class for any Jazz vocalist!  Clearly Joanne Tatham is not afraid to take risks and the result is a beautiful eclectic CD that will please even the toughest Jazz listener.

It was difficult to pick one song from this CD for you to listen to because I liked so many of them, and they are so different.  "Catch Me If You Can" composed by Eli Brueggemann with Lyrics by Mark Winkler is catchy and clever.  Who wouldn't love a Lyric by Mark Winker?  "Jazz 'n Samba" by Antonio Jobim and arranged by Guitarist Marcel Camargo and Tatham is wonderful.  But in the end, I had to give in to my love of standards and I attached a "YouTube"  of Joanne Tatham singing the old chestnut "Love Me Or LeaveMe" as good as you will ever hear this song sung.