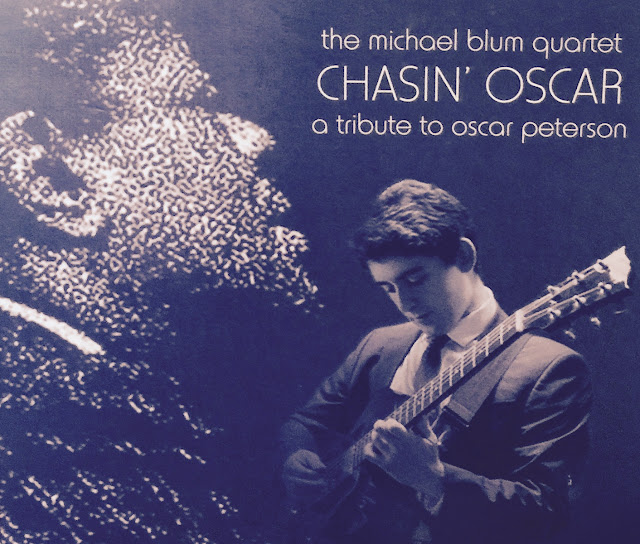 Everyone that loves Jazz loves Oscar Peterson!  If not the best Jazz pianist of all times, he certainly would be listed as one of the top three greatest of all times.  I have always tried to expose young people to the Oscar Peterson's genius so they could experience the music and joy that older generations have enjoyed.  When I received Guitarist/Vocalist Michael Blum's tribute to Oscar Peterson I was very excited to hear what it was about.  Michael Blum is a young and very talented Guitarist/Vocalist who was inspired by the legendary Oscar Peterson.  According to Blum: " I wanted to learn to play guitar like Oscar Peterson played the piano".  "One of the things I really love about Oscar is his ability to do anything on his instrument. He could play fast or slow, hard or soft, pretty or nasty, bebop or blues.  I wanted to emulate his emotional range in my musical homage",

In my opinion, Michael Blum has achieved his goal and his new CD "Chasin Oscar" is wonderful.  Check it out for yourself.  I have attached two YouTubes, the first one is Michael playing  the Peterson original "Nightingale" and the second is " Tristeza" that features jaw-dropping, breakneck runs that highlight Blum's ability to keep pace with the famously fleet-fingered master.