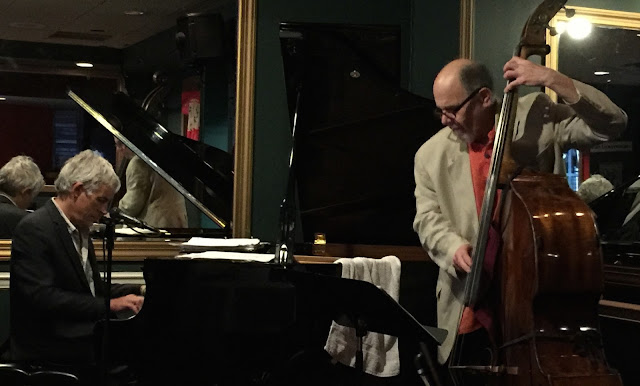 Shanghai Jazz has been one of the foremost Jazz clubs in the country.  The Jazz setting at Shanghai Jazz is perfect, large enough to seat 100 or more Jazz fans, and, yet, small enough to allow everyone in the audience to get up close to the performers.  Also, as I have mentioned in the past, the excellent food and above average service from the waitstaff would make this restaurant popular even without some of the best live Jazz sounds in the East.

Tuesday, July 21, the Jazz star was John Korba on Piano and Vocals accompanied by Julliard-trained Bassist, Hal Slapin.  I hadn't heard John play and sing in person before but he was strongly recommended to me by more than a few well-respected musicians.  John Korba is a multi-talented Pianist, Vocalist, Composer and Producer.  I was aware that Korba had performed with Daryl Hall & John Oates and had recorded with a Blues band called "Hudson River Rats", but I was surprised and very happy when John played and sang several classic songs out of the "Great American Songbook".  He has a wonderful voice and a style that is all his.  His playlist tonight consisted of songs from Stevie Wonder, James Taylor and Nat King Cole.  I loved his vocals however it was his thoughtful and intelligent Jazz Piano solos that represent his greatest talent.  John has a gentle touch that he applies to his piano that puts him in a class above most other performers.  John just doesn't just go through the normal motions when he plays, he brings his own musical ideas that seem to just spring out of songs that have been around for years.  John Korba can superbly play and sing every musical genre at a high level and keeps the total interest of his audience.

John Korba performs at Shanghai Jazz quite frequently and I highly recommend that you try to get over there to hear him.  Shanghai Jazz is located at 24 Main Street, Madison, NJ and you can call for reservations at 973-822-2899.  You can also check future performers at Shanghai Jazz on their site: Info@shanghaijazz.com.

I found a "Youtube" live performance of John Korba playing and singing the Hall and Oates classic, "Sara Smile" at Shanghai Jazz.     I hope John will think about cutting a CD of standards in the near future.