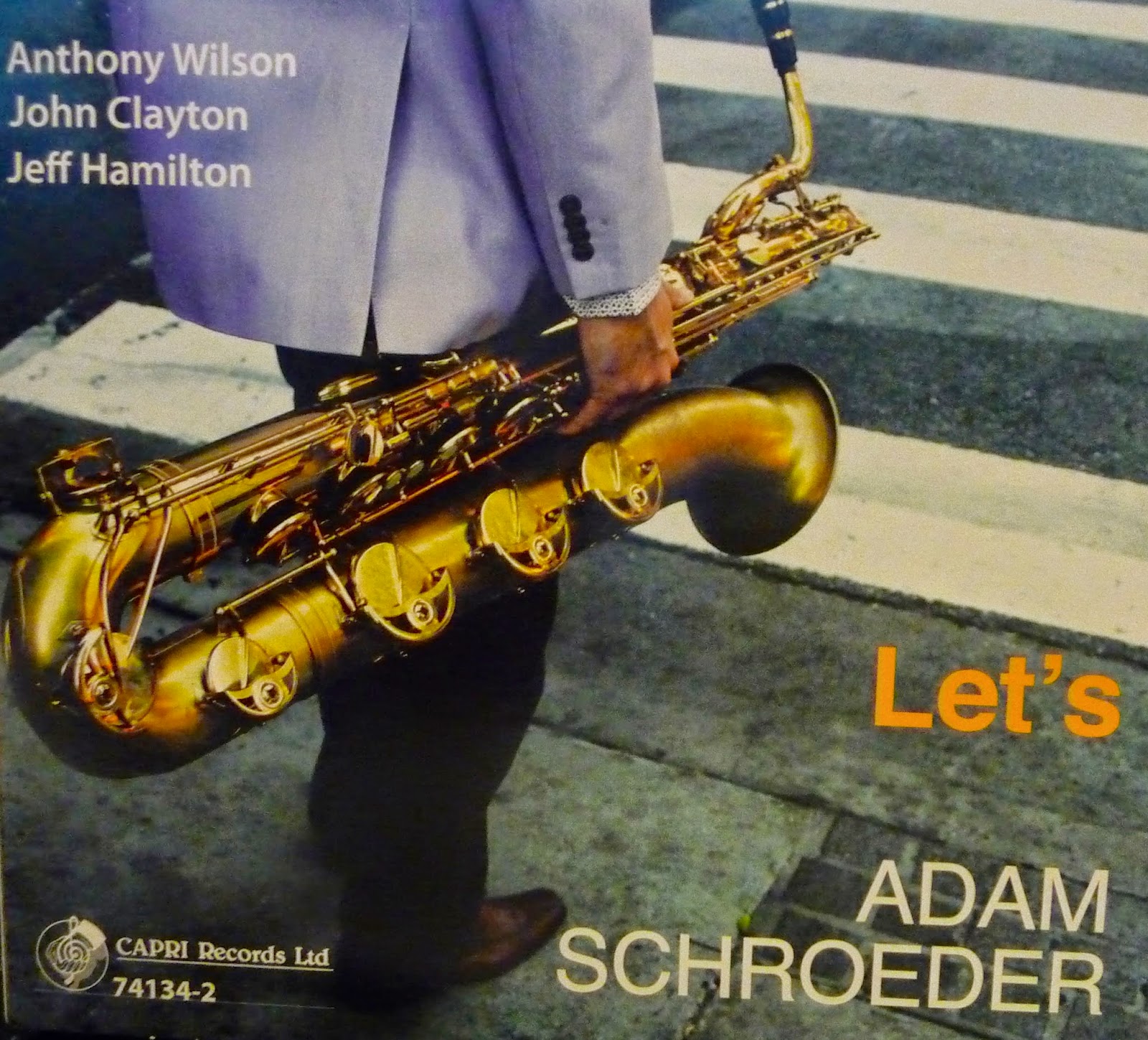 I started playing Alto Sax when I was in 3rd grade, but it wasn't until 8th grade when I fell in love with the sound of the Baritone Sax. That's when I discovered Gerry Mulligan and the magic he was able to produce with his Baritone Sax. I never had much success in creating a pleasing tone from my Baritone Sax which only increased my desire to hear anyone that could make this giant Saxophone sing! Over the years, there have been few Jazz Bari Sax players that have caught my interest until I heard Adam Schroeder on his new CD, "Let's".  Adam Schroeder produces a remarkably rich tone when combined with his amazing dexterity (on this big horn) and brings the listener to musical heaven. His ability to produce rich lows and soar to exciting highs from his Bari Sax are so good that at times the listener might forget these sounds are coming out of a Baritone Sax!

In picking the songs for this album, Adam wrote 5 out of the 11 songs.  The remaining 6 songs were selected by Adam using Melodies as his criteria. "Each of the songs written by others had to have the great melodies first and foremost. These are tunes that make you smile when you first hear them, and then reveal their compositional and harmonic depth the more you listen to them. They also offer vast freedom of expression for everyone to improvise on."

Adam has been able to put together what I think is the "Dream Team" of supporting musicians for this CD. Starting with Anthony Wilson on Guitar, John Clayton on Bass and Jeff Hamilton on Drums.  I first discovered this group of fabulous Jazz players when they backed Diana Krall on her "Live in Paris" album. This album is still one of the best Jazz standards album I have ever heard. As they like to say on the PGA Tour, "These guys are good"! The solos from this trio of world-class musicians are wonderful. They all have a way of improvising that is new and refreshing. The listener can hear every single note they play and yet they are always part of the supporting group even though each one of them could take the lead any time.

This CD will be release on June 17 on Capri Records. Make the effort to get this CD; it will be a keeper for your Jazz collection for many years to come.

I found a cut from the CD on YouTube and would like to share it with you. Attached below is Adam Schroeder Playing his own composition from his new CD "Let's".  The song is titled: " A Hawkeye, A Hoosier and Two Cali Cats". Great Music!

Ron Aprea, composer, arranger, producer, saxophonist, clarinetist and flutist is working on a new CD, "Lennon and the Beatles, A Jazz Tribute". In 1974, Ron cut a album with John Lennon and Elton John called "Walls and Bridges". Also recording with Ron on this album was a super-talented horn section that included Howard Johnson, Frank Vicari and Palm Desert favorite, Steve Madaio.

Ron is raising money to produce this new Lennon Tribute album using the Kickstarter site. I know everyone will be interested to hear Ron tell some interesting stories about the making of this album and his experiences with John Lennon in recording the "Walls and Bridges" album. It's sure to be a blockbuster CD and Ron needs some help to raise the money for it.  I have attached some information I just received from Ron including  the site address so you can hear Ron's stories and also contribute to support this wonderful musical project.

Just wanted to update you on my John Lennon jazz tribute album "Kickstarter" campaign, and thank those who've contributed.  I can't tell you how thrilled Angela and I are at the positive response we've received.

We are currently in Week 3 (of 6) and we are approaching 50% of our goal of $5,000, which is amazing, but we have to get to 100% to receive any of the pledges.  So please for this next push, forward the below link to any and all of your friends.  Also, I would love to give recognition to our donors via my Facebook and Kickstarter page, but I've been hesitant to do so, without your permission.  So for those who have already donated (or will) please let me know if you have any objection to your name being posted.

Thank you again for your continued support in helping me create my "dream" album.

CD Review: "Where Do You Start" with Bill Cote 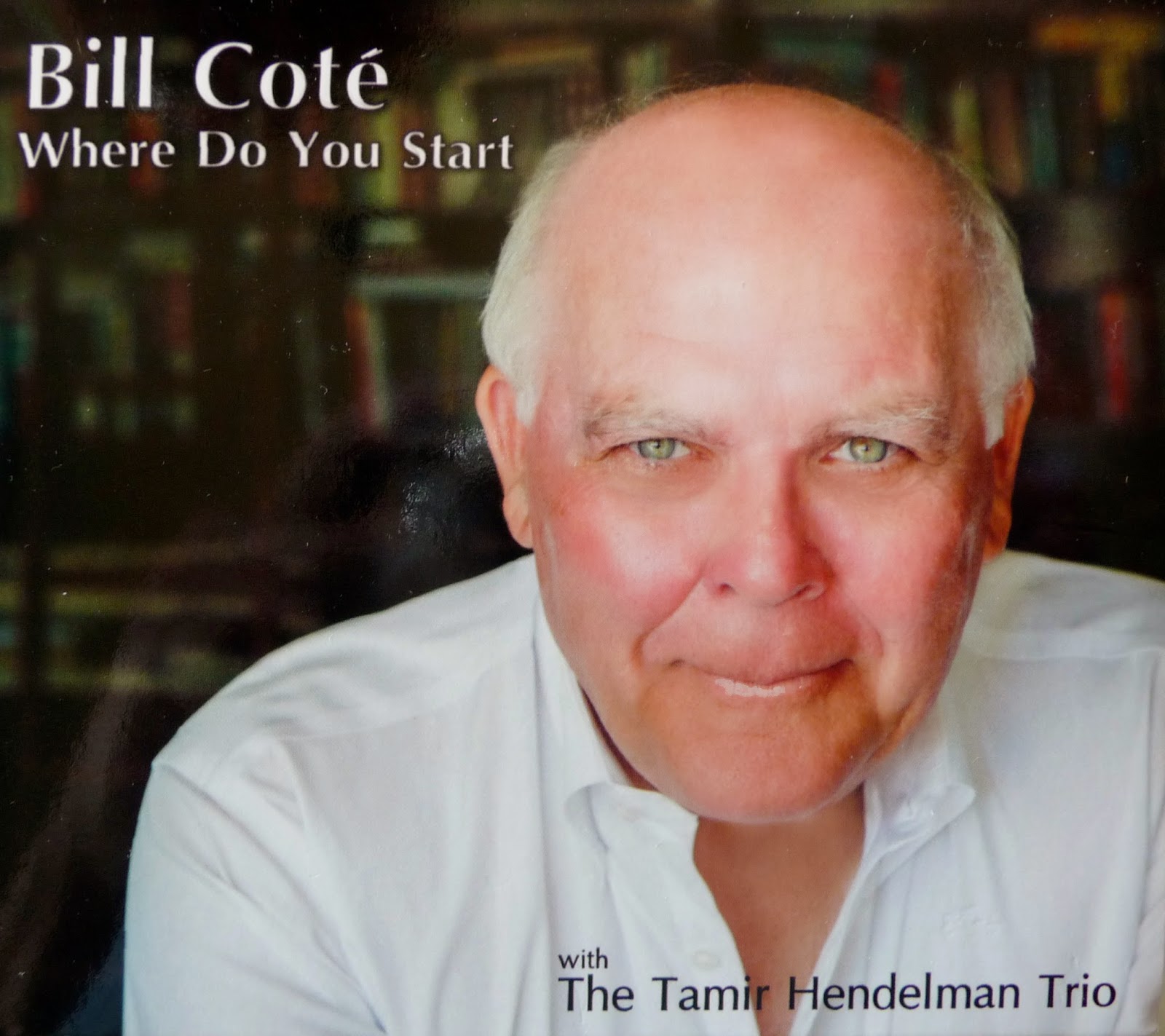 In a normal month, I receive 10 to 12 new CDs to review. Usually, I discover at least a couple that I really like. The CD I received today titled, "Where Do You Start" with vocals by Bill Cote accompanied by the wonderful Tamir Hendelman Trio is stunningly good!  Bill Cote is a successful businessman and lawyer who has been singing and performing informally for quite a long time.  He has been an avid Jazz supporter and counts among his close friends several Jazz luminaries. It is clear that he must have been a very good listener because his deep rich voice and phrasing skills are polished and professional.  His voice and impeccable phrasing reminds me of the great Johnny Hartman.  The songs he personally selected are nothing short of sensational.  Bill shared that he had been thinking about these songs for years and "Each song resonates with him for a myriad of different reasons".  Bill's singing fills each song with a deep emotional connection that gives life to the melody and the lyrics that transfers to the listener.  My only question to Bill Cote is "Bill, why did you wait so long to record your first CD?

Tamir Hendelman, the award-winning pianist who is a regular in the spectacular Clayton-Hamilton Jazz Orchestra did all the wonderful arrangements.  Tamir is one of my favorite pianists ever since I first heard him playing with The Clayton-Hamilton Jazz Orchestra.  His arrangements are perfect, and his piano solos are impeccable examples of great Jazz playing.  Joining Tamir are a group of some Southern California's best Jazz musicians, including Joe LaBarbera on Drums, Bob Sheppard on Sax and Flute, Graham Dechter on guitar and Martin Wind on Bass.

This is an award-winning CD that will be released on April 15, 2014.  If you love songs out of the "Great American Songbook" sung by a seasoned singer who can make lyrics come to life, then you must buy this CD.  As a side note, Bill has included 16 cuts on this CD.  I haven't seen this many cuts on a CD in 20 years, and it still works real good for me.