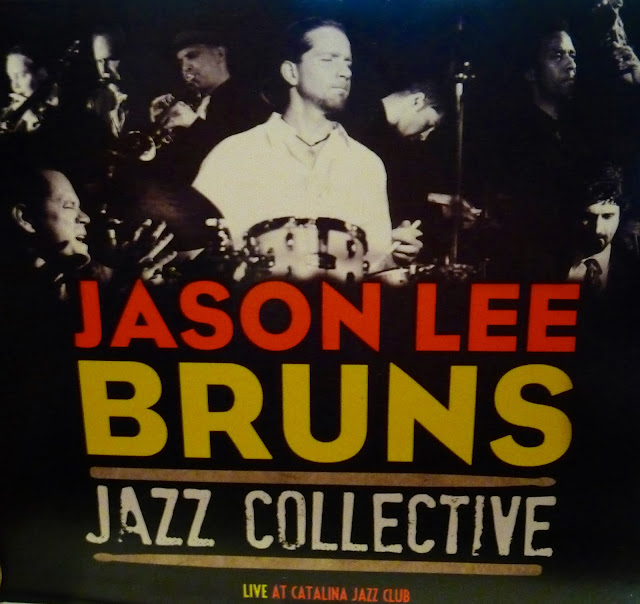 The Jason Lee Bruns Jazz Collection is an 8-piece group based in Los Angles, CA that was founded and led by Ohio-born Percussionist, Drummer and Composer Jason Lee Bruns. It is not often that you can find a band that has a Drummer as its leader, but that's what this CD is all about. What do Drummers think about when they provide the rhythmic foundation for the bands they support?  My guess is they think about different beats and sounds and their own unique arrangements  that they feel would do more justice to the songs they are performing. But does anyone ever stop and ask a drummer how he would approach the tempo or the arrangement of a song? Probably not;  well maybe Paul McCartney because he loves experimenting with sounds and let's not forget, Paul is a major class drummer also!

Well along comes Jason Lee Bruns, a Drummer's Drummer who gets to call his own shots and comes up with tempos, sounds and arrangements that appeal to him. But Jason Lee Bruns is not just on a musical ego trip here. For his CD he gathered 7 outstanding players to support him in this effort.  The results are spectacular, providing the listener with fresh, new sounds and rhythms that bring new life into some evergreens that might need some refreshing.  The new writing and arranging on this CD are wonderful. Jason wrote 5 arrangements for the 9 songs on the CD.  He also composed two of the songs.

This CD cooks and any Jazz buff will love every song.  My favorites included the classic Johnny Mercer tune, "Autumn Leaves" which is played seriously upbeat with a knockout arrangement produced by Jason. Kevin Bachelder does the vocals which includes great scatting that works perfectly with the backing of the group. Kevin also had a hand in my second favorite on the CD, "Send In The Clowns".  Kevin did the vocal and also the great arrangement of this Sondheim gem. Unlike Sinatra's version, that was then and this arrangement and tempo are now. This arrangement should be released as a single, it is really fabulous! K. Richmond did the arrangement for "Speak Low" which is worth listening to also.

The wonderful group of supporting musicians on this CD are listed below:

This CD was recorded live at the Catalina Jazz Club on Sunset Strip in Hollywood, CA.  The CD has a street release date of  September 24 2013.
at September 25, 2013