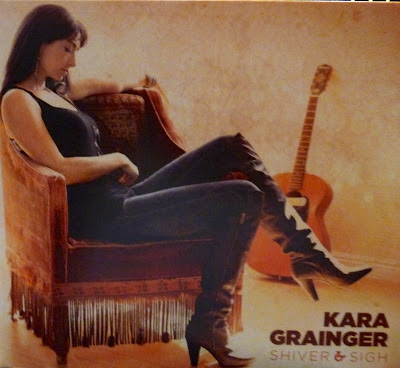 If you like down-home country Blues sung in the style of Bonnie Raitt, then Kara Grainger's new CD, "Shiver and Sigh" is the perfect CD for you.  Australian native, Kara Grainger is a powerhouse talent. She sings, plays guitar and writes her own songs.  This is the 3rd CD for this triple-threat star who writes great songs that only improve when she sings them.  Now living in Los Angeles, Kara started learning the guitar at age 12.  She has had a long performing history and while still relatively young, Kara has honed her skill over the years and now has arrived on the music scene in a big way.

When I listened to her sing, I heard the influence of Bonnie Raitt, and that's a good thing.  The fact that Kara writes her owns songs only makes her presentation more impressive.  Kara wrote 5 out of the 11 tracts on this CD.  She also sings a soulful interpretation of Robert Johnson's "C'mon In My Kitchen" and Al Jackson Jr/Timothy Matthews "Breaking Up Somebody's Home". Supporting Kara are a stellar group of seasoned musicians: Kirk Fletcher and Josh Sklair on Guitar, Mike Finnigan on Keys, Hutch Hutchinson on Bass, Kimi Bott and James Gadson on Drums, Lenny Castro on Percussion Mitch Grainger on Harmonica, Pauli Cerra on Sax Paul Litteral on Trumpet and George Stanford on Trombone. I have to mention that David Z was the producer/engineer and he did a superb job putting this CD together.  Everything works on this CD,  the songs, the vocals by Kara, the supporting musicians and the producer who put all the parts together to achieve this wonderful Country Blues CD.