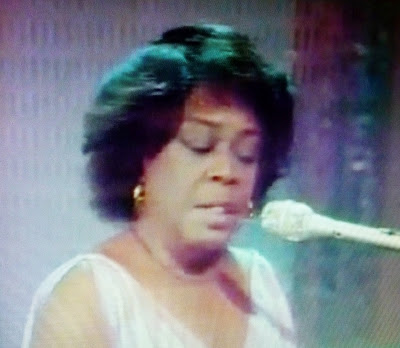 "The Divine One" Sarah Vaughn was born in the same town I was born, Newark, NJ on March 27, 1924.  She died much too young in LA on April 3, 1990.  She had a musical career that few will ever reach for over 50 years. It always seemed to me that Sarah Vaughn never got the public recognition she so deserved but was loved by every talented musician of her time. Her voice was powerful and silky and some say her voice range could cover  4 octaves.  Every great singer of her time acknowledged her greatness without exception. The great Ella Fitzgerald called Sarah "The world's greatest singing talent"! The first time I got to hear Sarah sing live was in the late 50's at the great New York jazz dinner club, "Basin Street East", and I have been a fan ever since. Sarah's voice was so versatile that at times it seemed more like a finely tuned instrument rather than a human voice.

I have attached two YouTube videos that will define "Sassy" Sarah Vaughn certainly better than I could. The first is the great evergreen, "Stardust" and the second is everyone's favorite, "Over the Rainbow" Few singers back then or even today could even come close to her magnificent level of musical talent. She left us much too soon. Thankfully, we still have her music to remind us of how wonderfully she could sing.

I would like to dedicate this Sarah Vaughn posting to my friend from the California Desert, Yve Evans. Listening to Yve singing and playing piano this past winter and feeling her love and respect for "Sassy" rekindled my fond memories of the "Incomparable" Sarah Vaughn. 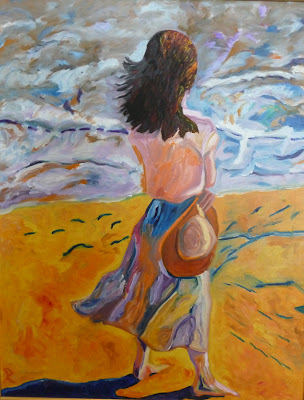 We are also developing a jazz-loving following from countries outside the US.  Take a look at the list of the top 10 countries ranked by number of views of the "Music Man Blog".

In our first two years of posting, the highest month of pageviews was May 2011 with 2,172.  After our third years we broke new ground in September 2012  when we recorded 5,886 pageviews.

Technorati, the leading organization that tracks the level of activity for Blogs across the world ranked the "Music Man Blog" number 52,377 out of a blog total of 1,312,806 blogs worldwide.  This puts the "Music Man Blog" in the top 4% of all active blogs. We moved our ranking ahead of 46,685 blogs in the past 12 months.

I want to personally thank all the supporters of great American music and  the "Music Man Blog". We will continue to promote both live music performance and also all the great musicians that continue to record their music and the songs of the "Great American Songbook". Thank you all for keeping the music playing!
Warmest Regards, The Music Man Blog.
at October 17, 2012 No comments:

The first time I heard Catherine Russell's most recent CD, "Strictly Romancin" she became one of my favorite Jazz singers. As soon as I found out she was scheduled to perform at Shanghai Jazz in Madison, I called for a reservation. That was a good decision because Catherine's Friday night performance was standing-room-only.

This was the first time I heard Catherine Russell live and she exceeded all of my expectations!  Catherine is a five foot and change "Tower of Power". She has an unbelievably strong voice which is even more remarkable when you realize those great sounds are emanating from such a small lady. At tonight's performance she brought 3 of her regular, super-talented sidemen.  Catherine's musical director and arranger Matt Munisteri on guitar.  Lee Hudson was on bass and Mark Shane played piano. These three talented musicians provided Catherine with the perfect musical support for her voice and style.

According to Catherine, "I only sing songs that my personal life experience allows me to relate to". This is one of the reasons she is such a great singer and what I noticed when I first heard her most recent CD. When I reviewed this CD in my blog posted in December of 2011, I commented "These songs demand an emotional understanding of the story the lyric is telling and requires the singer to sing the story with style and clarity. I believe one needs to call upon past life experience to perform these songs in a way that can bring the listener in". The songs Catherine selects are not easy songs to sing but as a testimony to her great singing skills, she performs them with refreshing honesty and clarity.

Tonight's performance was also special for Martha Chang & David Niu, the proprietors of Shanghai Jazz.  Shanghai Jazz first opened on October 1, 1995 and they were celebrating their 17th year in business. The great thing about Shanghai Jazz is that in addition to being one of the premiere
Jazz destinations in the Northeast, this restaurant would be successful even without the great Jazz due to the great food and outstanding service.

It was announced that Catherine Russell agreed to perform on New Year's Eve at Shanghai Jazz as she did last year. My advice is to make your reservation now or you will be shut out as this event will sell out quickly.  You can call 973-822-2899 for a reservation or just visit their site, www.shanghaijazz.com. 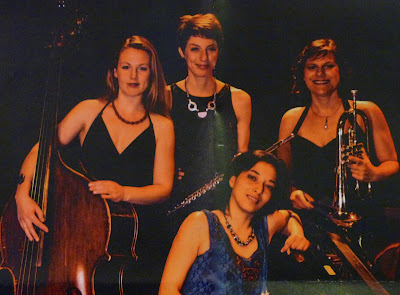 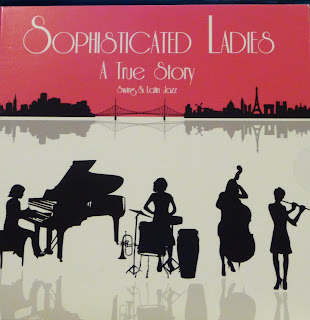 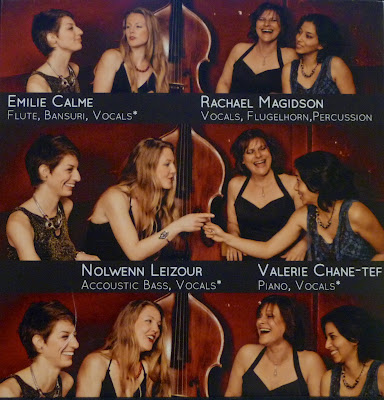 I listened to a new CD last week "Sophisticated Ladies, A True Story" that is sure to please most of the readers of this blog.  The Group is made up of four talented women who sing and play their own new and refreshing takes to some great standards along with some new songs and rhythms starting with Swing and moving to Cuban Bolero and Indian Bansuri.

The CD starts with an uptempo version of the Rogers and Hart gem, "The Lady Is A Tramp" that highlights the voice of Rachael Magidson on vocal, Emilie Calme on flute, Nolwenn Leizour on Upright bass and Valerie Chane-Tef on piano.  I think this cut represents the group's talents which were used in the creation of this CD.  Rachael does most of the vocals and also contributes on Flugelhorn and Percussion and Emile, Nolwenn and Valerie also provide vocals on cut #8, "Dancez Sur Moi".

I loved cut# 4, "Autumn Leaves" which is sung in French by Rachael.  It starts slow and moves into a fine Latin rhythm. Cut# 5 is an instrumental that features outstanding jazz flute by Emilie and great Latin rhythm from the rest of the group.

These four women bring not only their musical talents to this CD project but also share a musical story that reflects their personality and life experiences. If you like great standards approached in new ways by talented Jazz musicians, this CD is for you.

This is the first CD from the Sophisticated Ladies and will be available on October 18, 2012.  I know it will be well received and hope we hear more from these talented ladies in the near future.
at October 08, 2012 No comments: 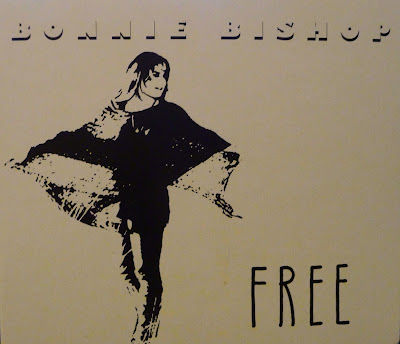 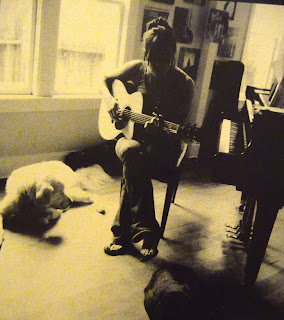 Usually when I review a new CD from an artist new to me, I need to hear the cuts a few times in order to get a feel for the artist and his or her performance. That was not necessary for the new CD from Bonnie Bishop called "Free". Bonnie Bishop is a very special singer/songwriter/musician loaded with talent. When she sings her songs she paints pictures that our alive with emotion and truth. Only singers that have experienced the kind of stories in her lyrics could make them this believable. Bonnie started touring in 2002 and released four regionally-acclaimed albums over a period of six years during which she received a nomination for "Vocal Performance of the Year". She is simply a "great singer". Bonnie's soulful and raspy voice contains parts of Janis Joplin and her musical hero, Bonnie Raitt and maybe a little Adele also.

In 2008, Bonnie moved to Nashville to focus on her songwriting career. This was an excellent decision because all the songs she has written on this album are outstanding. I could think of several singers who  would have no  problem turning any one of these songs into popular hits. According to Bonnie, "My music evolved because I fundamentally changed. My experiences in the last few years, however painful, taught me humility and personal accountability." It seems that this life experience also taught Bonnie how to sing and write music like a big time musical star!

Bonnie recently had the thrill of having her mentor, Bonnie Raitt record a song she co-wrote with Al Anderson, "Not 'Cause I Wanted To" on Raitt's new album "Slipstream". According to Bonnie Raitt,"Bonnie Bishop is so talented, and very special. She's an amazing presence.  I think she's going to be a big star." I join Bonnie Raitt in stating that Bonnie Bishop's time has arrived. The release of this Album on October 9, 2012 will announce to the world that the next major singer/songwriter/musician to take center stage is Bonnie Bishop.
at October 02, 2012 No comments: