Last Friday night, February 10, I went over to the Indian Wells Resort in Indian Wells to visit my friend, Frank Di Salvo.  I met Frank last Winter shortly after he started singing at this great resort hotel  and I was surprised by the level of talent that Frank brings to his audiences at every performance.  The advertisement I first saw last year advertised that Frank was singing in the same style that Sinatra sang his signature songs. I went to see him with the expectation that I would hear just another singer trying to sound like Sinatra, but I was mistaken.  What I heard that first night was not only a singer who had a great appreciation for the voice and talents of Sinatra, but also a singer with a strong voice and style of his own.  The show Frank puts on at the Indian Wells Resort is not just a singing act.  It's a trip back into the history and best music of the "Great American Songbook" with Frank leading us all the way through the journey.  When I made my first visit to see Frank last Winter, the performance took place in a small corner of the lobby and with a small but appreciative audience.  I was impressed and was not surprised that last season Frank's audience grew almost every week until he was playing to standing room only audiences by the end of the Winter.  I wasn't the only one who noticed.  The president of the Indian Wells Resort, David Nichols quickly realized that he had something "special" with Frank and committed to a large financial investment to expand the small area Frank was performing into a great new showroom that even Sinatra would have been happy to perform in. It's called "Frank's Place" and that is exactly what it is.  Walking into this comfortable showroom, the first thing you see are rare pictures on all the walls of the giants of American music, Sinatra, Bennett, Nat King Cole, Perry Como and many others. Mr Nichols didn't stop there, he turned Frank's one year contract into a five-year deal.
As a result of these savvy management moves by David Nichols and the great talents of Frank Di Salvo, almost every performance Frank has given this Winter season has been sold out.

Frank does so much more than sing Sinatra songs, he loves to sing songs by all the greats, Jack Jones, Bobby Darin, Tony Bennett, Andy Williams, Nat King Cole and Dean Martin just to name a few.  Frank pays tribute to them and their craft in songs and with stories that he shares with the audience.

When you go to see Frank Di Salvo you just don't see and hear a singer.   What you get is a seasoned, muti-talented entertainer that will bring back great memories of the music of your life that is guaranteed to make you leave the show smiling and happy.

Tonight's performance was even more special because Dale Curtis, a talented Trumpet and Flugelhorn player and an old friend of Frank's sat in on several numbers.  Dale resides in Ketchikan, Alaska and traveled down to Indian Wells to jam with Frank. He was a great addition to the show and played wonderful.  Dale has an impeccable musical resume that includes performing with some of the best in the business like, Lionel Hampton, The Supremes, The Temptations, John Clayton and Diane Reeves.  Dale has recently recorded a new CD "Bridge To Nowhere" with "The Dale Curtis Quintet" that I will be reviewing in a future blog.  I hope Dale comes back to the Desert again in the near future and maybe he will bring his Quintet with him.
at February 24, 2012 13 comments:

Rizzo "The Great" At Vicky's

Take a look at the faces on the group picture above and it will give an idea of the quality of music the Pat Rizzo Band is performing at Vicky's.  This was my first visit back to Vicky's to see Pat's group and the music was better than I remembered.  First of all, Pat is "the man" when it comes to tenor sax playing in the Desert.  And his singing keeps getting better all the time. Pat has a great range and a keen sense of timing that allows him to sing the great songs perfectly.  Whether he is singing a Sinatra or a Bennett song, the results are always very satisfying to his audience. He also plays wonderful flute with seemingly no effort. Just a wonderful performer to see and listen to.  However, tonight I noticed that the other members of Pat's group, Jim DeJulio, Steve Neilen and Yarek Urant were just outstanding and far better than when I heard them last year.  First of all, in my opinion, Yarek Urant is one of the best pianist in the Desert today, if not the best.  If I were a singer, I would want Yarek on the keyboard without a doubt. Yarek brings a soft refreshing, emotional touch to the piano that most pianists just never get near.
Jim DeJulio is a joy to not only listen to but to watch.  If anyone ever had the desire to play the upright bass, this is the bass player they should study.  Jim has played with the best of the best in the music world, and the reason is very simple. When it comes to the bass, he is in a class of his own. Every time I hear Jim play he reminds me of one of my heros, the great Ray Brown. And if anyone thinks your bass playing compares with Ray Brown you are at the top of your game and Jim certainly is in this class!
Steve Neilen completes this group perfectly and always keeps the group in a perfect groove.  Together, the four piece Pat Rizzo Band is one of the most talented musical groups ever to play in the Desert or anywhere else for that matter.  Don't leave the Desert until you get to hear them at least once!
Carol Hampton was in the audience for tonight's performance and sang a couple of great standards in her usual great voice and style. Carol's stage presence always makes her a great additional to any venue.
at February 20, 2012 2 comments:

Yve Evans, Music As Good As It Gets!


Back to Woody's again on Jan 26th to hear keyboard player Barnaby Finch, Sax and flute player Rod Kokolj, drummer Jeff Olsen and of course, the main man, Bill Saitta on bass. I had hear many good things about Barnaby and had to hear him for myself. He was terrific and so was the rest of the group.  I had hear Rod Kokolj before but he was in the groove tonight.  And many of my singer friends had told me that Jeff Olson had the softest hands in the desert and I can now validate their opinion.  The sounds tonight were wonderful and the quartet played to a full house of appreciate Jazz fans.

I have to say that if you have not been to Woody's yet you are really missing the boat. Tonight Woody's had a free wine tasting with finger food.  And the menu at Woody's is great if you like comfort food and great wines at the lowest prices in the desert.  If you like great jazz sounds and great reasonable food, Woody's is your place. It's located at 317 Indian Ave., Palm Springs, Ca.
at February 05, 2012 2 comments: 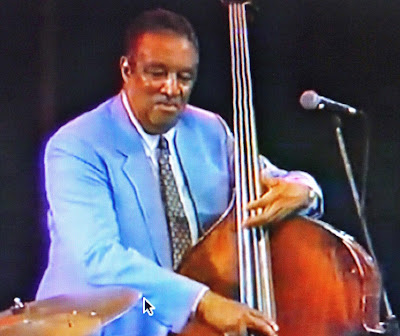 Ray Brown
Last month I published Chapter One of  "The Jazz Giants" highlighting Oscar Peterson.  The subject of Chapter Two, Ray Brown could be called Oscar's partner because they recorded so much wonderful music together.  When it comes to upright bass, Ray Brown was the man. Ask any professional musician who the "best of the best" is when it comes to upright bass, and you will always see Ray Brown at the top of the list. At the age of Twenty Ray was introduced to Dizzy Gillespie who was looking for a bass player. Dizzy hired Brown on the spot and Ray soon was playing with musical greats, Art Tatum and Charlie Parker. It was in 1952 after his divorce from Ella Fitzgerald that Ray got to work with Oscar Peterson and  continued to play with Oscar's band from 1952 to 1966. Ray was awarded a Grammy for his composition "Gravy Waltz", a song that later became the theme song for "The Steve Allen Show".  During 1990 to 1993 the Oscar Peterson Trio reunited and the albums produced during these three years earned 4 Grammy awards. The group stopped performing in 1993 when Oscar suffered a severe stroke.  Ray was highly regarded as a master teacher and was always in demand by outstanding musicians trying to improve their skills including John Clayton, Jeff Hamilton and Diana Krall when she was only playing piano and not singing yet.

I found two youTubes for you to listen to and hear the Ray Brown experience.  The first video is a Ray Brown solo on "Black Orpheus" that is just wonderful. Ray Brown performed this song as part of the celebration of his 75th birthday.  The second video is "The Ray Brown Trio" playing "Lady Be Good" with Gene Harris on piano and Jeff Hamilton on drums.  Enjoy!