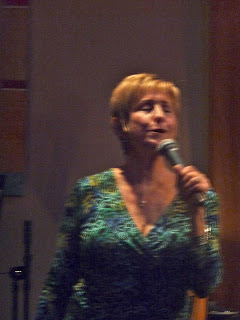 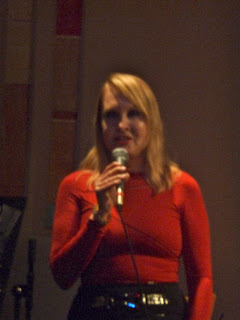 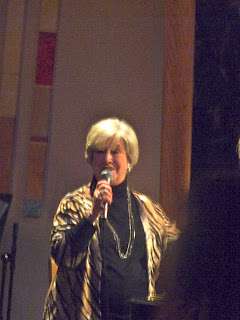 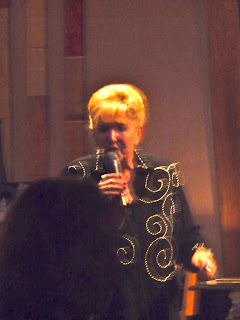 Tuesday night, January 24 an overflow audience came to Vicky's of Santa Fe restaurant in Indian Wells to honor the memory of one of the most unique individual who lived in the desert, Ruth Gibson.  Ruth recently past away at the young age of 91 and Tuesday night was a chance for her many friends to remember her bigger than life personality and remember how she surrounded herself with music and laughter. Even if you never knew Ruth, after listening to her songs, stories related by her friends and music played throughout the night by some of the best musical talent in the desert, you would have to leave this tribute feeling like one of her friends.

One reason so many musicians turned out to honor Ruth was not only for all her talents and her positive, zany personality but because she was a very giving person.  All the musicians and friends attending related stories about how Ruth had reached out to help them time and time again.  Ruth has left a void difficult to fill but if her friends continue to live by her example, her spirit will continue. 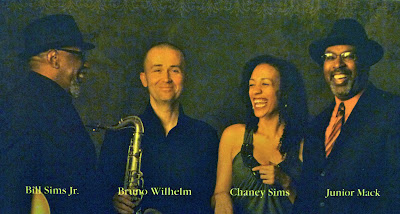 The Heritage Blues Orchestra's new CD, "And Still I Rise" will be released on February 28, 2012. This new CD was produced by Grammy-nominated producer Larry Skoller and was recorded in Brooklyn, NY. I would have guessed that it might have been recorded in the deep South maybe New Orleans because it has the feel of traditional Black deep country blues and yet brings a new fresh approach to the genre'.

This may be a new CD for the Heritage Blues Orchestra but the sounds captured in this CD are a beautiful blend of old traditional blues with some sensational modern musical talents. This is a must CD for anyone who loves down home blues.  The cuts on this CD give the mental image of this group of talented musicians playing in the backyard or perhaps on the front steps of a house in the deep South. Bill Sims Jr's singing is outstanding throughout but especially on the Muddy Waters classic, "Catfish Blues" and also on "Big-Legged Women". The electric slide guitar work by Junior Mack is a good as it gets! Chaney Sims, daughter of Bill Sims Jr. sings with a reality of life experiences. Chaney has many versatile singing styles and she gets to express them all on this CD from soulful blues to gospel testimony. The last song on the CD, "Hard Times"is beautifully arranged like a three-part suite.  It starts with the soft and silky voice of Chaney Sims have a musical conversation with a soft guitar. Then is moves into fabulous horn symphony arrangement written by Bruno Wilhelm that is haunting and Bruno then finishes with a terrific tenor solo. Vincent Bucher plays wonderful harp through out and Matthew Skoller plays a great harmonica solo on "Big-Legged Women". The drumming provided by Kenny "Beedy Eyes" Smith provides a strong foundation for the group throughout the CD.

What makes this blues CD very special is that every musician participating in making this beautiful music is a master of the blues.  Put them all together in the Heritage Blues Orchestra and what results is a must have CD for any lovers of traditional American blues. 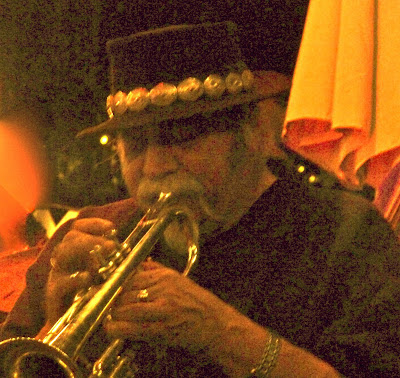 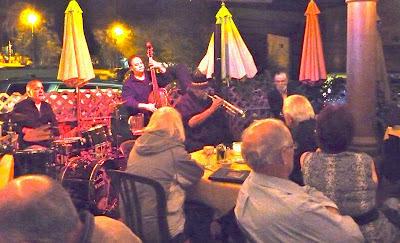 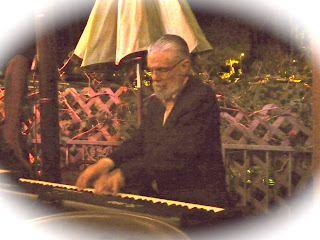 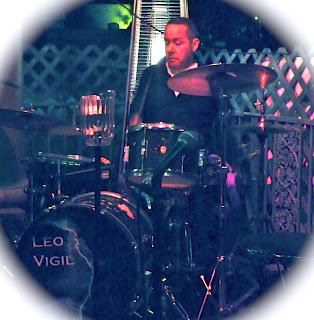 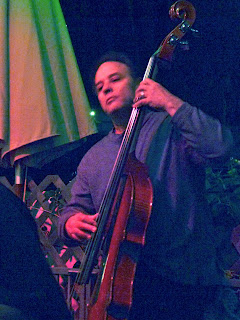 Tuesday night is Jazz night at the Backstreet Bistro in Palm Desert.  And tonight we had the pleasure of seeing my good friend Steve Madaio perform his magic on the trumpet.  Steve has to be the most understated musician in the desert.  Not many people are aware of Steve's impressive musical resume' that few musicians anywhere could come close to.  Steve has played with the "Best of the Best" and has recorded way over 100 CD's that have become million sellers!  Hearing the way Steve plays love songs from the "Great American Songbook" with soft and emotional tones that few musicians can get out of a trumpet, it is hard to believe that he has recorded with Earth, Wind and Fire and toured for two years with the Stones in Europe. Steve's skills put him in the same class as giants like Miles Davis and Chet Baker when it comes to projecting the emotion of a lyric without anyone singing the lyric. Tonight he gave us more proof of his ability and began his first set, with "What's New" moved on to "My Funny Valentine"  combined with "There Will Never Be Another You".  Three of the best American love songs ever written. Few musicians have the ability that Steve does to approach these ballad gems with a soft touch and the romantic emotion that Steve's sound projects. You will have another chance to hear Steve again at Backstreet on Tuesday, February 7.  Steve also plays under the stars at the Bluember in Rancho Mirage on Sundays at 6:00PM.

Joining Steve tonight was an outstanding group of musicians with Leo Vigil on drums, Jimmie Dykes on Keyboard and our friend Bill Saitta playing the upright bass. Tonight was the first time that I got a chance to hear Leo and Jimmie and they did not disappoint. Leo provided a solid foundation for the group on all the songs and Jimmie played some fine solos including a very special one on the great classic "Body and Soul". I also thought Bill Saitta played his solos especially sharp tonight and his solid bass provided a wonderful bottom range to support the group throughout the performance.  A wonderful evening of music and great food at the Tuesday night place for Jazz, Backstreet Bistro.
at January 23, 2012 2 comments:

Bill Saitta and "The Funk Junkies" Have Some Jazz Fun At Woody's Burgers & Beer in Palm Springs, Ca

We're back in the California desert doing my first music review of the winter. On Saturday, we traveled to Palm Springs to visit Woody's Burgers & Beer, a new restaurant and jazz club located at 317 No Indian Canyon Drive. Woody's opened 8 months ago and has already become established as a great place for great burgers and great live jazz sounds. You will love the food and the reasonable prices.  You can sit and enjoy the live music with no cover charge.  Sounds just about perfect to me.  Woody's has live Jazz six nights a week from Tuesday through Sunday. So now we can add another great place for Jazz to our list. Call 760-230-0188 for reservations and say hello to the owner, Wayne Woodliff who will take good care of you.

"The Funk Junkies" is a group that was put together by Bill Saitta and it produces some great sounds. Bill likes to describe the group as playing "Funky Eclectic Jazz" but it sounds like "Smooth Jazz" to me. The program tonight was carefully put together with a wide range of sounds and rhythms. Some of the tunes I enjoyed the most were Ellington's "Don't Get Around Much Anymore" Stevie Wonder's "All In Love In Fair" and the great Cannonball Adderly classic "Mercy, Mercy, Mercy". If you like the sounds of great tenor sax, you have to catch this group and listen to Kelly Corbin. "The Funk Junkies" will be at Woody's on Saturday January 21st and Saturday January 28th from 7:00 to 11:00.

The group consists of Bill Saitta on Electric Bass, John Higgins on Keyboard, Larry Mitchell on Drums and Kelly Corbin on Tenor Sax.